Abstract Coal-fired self-sufficient power plants have a long history. They are power plants that are invested and built to meet the energy consumption requirements of their own production and use of gas. They generally do not send electricity to the national grid. Due to complex history, system, market and other reasons, coal-fired power plants are now facing many problems. How to strengthen and regulate... 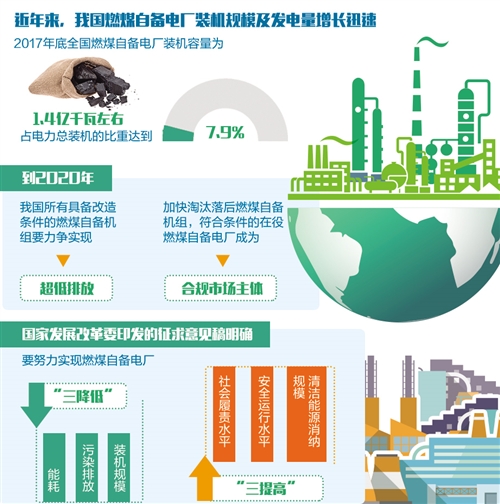 The coal-fired self-sufficient power plant has a long history. It is a power plant invested by the enterprise to meet the energy consumption requirements of its own production and electricity consumption. It generally does not send electricity to the national grid. Due to complex history, system, market and other reasons, coal-fired power plants are now facing many problems. How to strengthen and standardize the supervision and management of coal-fired self-supplied power plants is an important measure to resolve the risk of overcapacity of coal-fired power plants. It is also a key task for further strengthening power planning and promoting the orderly development of the power industry in the future.

Recently, the General Office of the National Development and Reform Commission issued the â€œSpecial Governance Plan for the Construction and Operation of Coal-fired Power Plants (Consultation Draft)â€, which proposed 24 rectification opinions for the construction and operation of the national coal-fired self-supplied power plant. It is called â€œthe most stringent coal-fired power plant remediation policy in historyâ€. Under the situation of deepening the reform of the power system, implementing the energy revolution strategy, and promoting structural reforms on the supply side, the sound development of coal-fired power plants will play a vital role.

Promote the reform of the power system "source of living water"

Xiong Huawen, deputy director of the Energy Efficiency Center of the Energy Research Institute of the National Development and Reform Commission, believes that in the face of the historical problems of coal-fired power plants, the correct attitude should be to abandon "colored glasses" and respect their instinctive motivation to create social value. Its own advantages continue to play its due role, making it a useful complement to public power plants.

Xiong Huawen analyzed that under the premise of solving historical problems and eliminating unfair competition, coal-fired power plants can play an active role in at least three aspects. First of all, the self-provided power plant has the advantages of close to the terminal load, high management efficiency, and stable utilization hours. It can provide stable and low-cost power and heat supply for enterprises and surrounding residents, helping to reduce the energy cost of enterprises. Secondly, the power unit of a coal-fired self-supplied power plant is generally small in size and widely distributed, and can flexibly undertake the task of peak shaving, and has a cost advantage. Thirdly, enterprises with grid-connected power plants are important market players across the power generation side and the power consumption side. They are less constrained by traditional institutional mechanisms and have the conditions to become the â€œsource of living waterâ€ for promoting power system reform.

Fair participation in market competition is an important driving force for power system reform. "Only by clearly defining the responsibilities and rights, we can promote the coal-fired self-supplied power plant to become a qualified market entity, participate in market competition fairly, and improve the efficiency of resource allocation." Xiong Huawen said that from the perspective of responsibility and obligation, the coal-fired power plant must be sufficient. The payment of government funds and surcharges, the reasonable payment of relevant fees; the implementation of unified environmental protection, energy consumption, phase-out and other mandatory requirements, which is the basis for fair and orderly competition; at the same time, strict implementation of scheduling discipline, obey the power dispatching agency Operational arrangements, comprehensive implementation of relevant regulations and standards for the power industry, and responsibility for power grid safety peaking.

Zhou Fuqiu, director of the Energy System Center of the Energy Research Institute of the National Development and Reform Commission, believes that as a main power generation unit different from a general public power plant, the self-provided power plant should also enjoy certain rights and autonomy on the basis of its due responsibilities and obligations.

â€œFor coal-fired self-supplied power plants, it should allow non-discriminatory access to the grid and participate in market transactions independently.â€ Zhou Fuqiu said that for self-sufficient power plants that meet the requirements, they should have equal and non-discriminatory grid access services; The power of the enterprise other than self-use can be directly traded with the main body of electricity sales, power users, or through trading institutions; enterprises that cannot meet their own electricity demand should be regarded as ordinary power users and participate in market purchases on an equal basis.

Zhou Fuqiu said that the self-provided power plant should be allowed to independently provide auxiliary services such as peak shaving according to its own load and unit characteristics, participate in the assessment and compensation of auxiliary services of the power grid fairly, and obtain the proceeds according to relevant regulations. Coal-fired self-supplied power plants can also reduce spontaneous energy consumption by market means, increase market purchases, replace wind power, photovoltaics, hydropower and other clean energy, and promote their new energy consumption while increasing their own revenue.

The draft of the consultation issued by the National Development and Reform Commission clarified that in accordance with the principle of safely handling stocks and strictly controlling the increment, we should speed up the standardization of coal-fired self-supplied power plants, and strive to achieve energy consumption, pollution discharge and installed capacity of coal-fired power plants. "Three reductions" and the level of social responsibility, safe operation, clean energy consumption scale "three improvements."

"Considering the problems existing in coal-fired power plants in various regions and enterprises and the complexity and diversity of the environment, scientifically controlling coal-fired self-supplied power plants must be determined and strengthened, and respect history and safety. According to the principle of differential treatment and orderly ordering, Xiong Huawen said that in the process of governance, we should adhere to the principle of â€œgroomingâ€ and prevent â€œone size fits allâ€ methods without distinguishing between specific situations and specific targets.

At present, the phased goal of regulating coal-fired self-sufficient power plant management is to promote it to become a qualified market entity and achieve fair and orderly competition with public power plants. The ultimate goal is to switch to a public power plant and implement comprehensive and integrated management.

Xiong Huawen suggested that the promotion of coal-fired self-supplied power plants to public power plants needs to be gradual and gradual. On the one hand, coal-fired self-supplied power plants should adhere to the same standard management as public power plants in terms of paying various fees, undertaking social responsibilities, meeting energy conservation and environmental protection standards, and maintaining power grid safety; on the other hand, self-supplied power plants are not public utilities, Its own characteristics and interests mechanism should guide its enthusiasm for creating value and enhance the quality and efficiency of economic development. Therefore, it is possible to consider autonomy, flexibility and convenience in terms of power generation hours, participation in market transactions, surplus power access, and grid access decision-making, and then steadily promote comprehensive and integrated management.

Properly solving all kinds of historical problems is the premise and basis for scientifically controlling coal-fired self-supplied power plants. In general, the problems left over from history can be divided into two categories, one is the payment of government funds and additional related expenses, and the second is the violation of the project construction and the incomplete running qualifications.

Xiong Huawen suggested that for the first type of problems, it is necessary to strictly implement the relevant policies, and collect all the fees in full, so that all receivables should be collected. In the future, the self-provided power plants shall be included in the financial credit information platform and enterprise credit information system, etc., and they shall be urged to pay relevant fees on time and in full, and assume social responsibility fairly. For the second type of problem, it is necessary to clarify the sufficient conditions for "legalization of identity" as soon as possible. As for the incomplete procedures, as long as the conditions are met, the production and operation of the self-provided power plants should be normalized and legalized as soon as possible in accordance with the principles of accountability, handling personnel, handling procedures, and compliance with production. Projects that do not have the conditions should resolutely take measures such as shutting down and dismantling to prompt them to withdraw from the market.