Also driven by market demand, in the first half of 2014, China's battery module production capacity exceeded 40 GW, and the output was about 15 GW, an increase of 30.4%.

From January to May 2014, China's solar cell export volume was 5.492 billion yuan, a year-on-year increase of 25.6%. Japan is still the largest export market for solar cells in China, with an export value of US$19.1, accounting for 34.8. %; exports to Europe were US$1.044 billion, accounting for 19%; exports to the US were US$1.041 billion, accounting for 19%. Europe accounted for 67% and 30% of China's total exports in 2012 and 2013 respectively. In the first half of 2014, the proportion of exports to Europe continued to decline. China's PV module exports are more diversified, including Japan, the United States, India, South Africa, Asia and other countries. The proportion of exports to the region is increasing.

Be wary of new capacity expansion

However, while China's PV industry is welcoming the market recovery, many industry insiders have said that they need to be alert to a new round of overcapacity.

In terms of polysilicon, enterprises such as Inner Mongolia Shenzhou Silicon Industry and Sichuan Yongxiang Polysilicon Company have started or are ready to start construction. TBEA has 12,000 tons of full-scale production, and Grand New Energy has doubled its capacity in the first phase in 2014, from 6200. The ton is expanded to 12,000 tons. In the second half of this year, with the start of shipments of polysilicon enterprises such as Jiangsu Zhongneng, TBEA, Luoyang Zhongsi Hi-Tech and Daxin Energy, the total output of polysilicon will reach 70,000-80,000 tons. The annual production of polysilicon in 2014 is expected to grow year-on-year. 100%.

In terms of battery components, Artes Solar has increased its capacity to build its plant in Ontario, Canada from 330 MW at the end of 2013 to 530 MW on January 31, 2014. Jinko Energy acquired 500 megawatts of battery capacity, 500 megawatts of silicon wafer capacity, and 100 megawatts of module capacity through the acquisition of Jianshan Optoelectronics. After Trina Solar upgraded its production line in the near future, component capacity increased from 2.4 GW in mid-2013 to the current 3.3 GW. CCID think tank Electronic Information Industry Research Institute predicts that global component production will continue to grow in 2014, reaching 52 GW for the whole year, and China's PV modules are expected to exceed 28 GW.

"The current market supply and demand balance is still relatively fragile. If the company expands blindly and competes to expand production, I am afraid that there will be overcapacity again. The PV industry may return to the "cold winter" in 2012." Jiang Hua said.

The export share of this traditional target market in Europe fell sharply. In 2012, the EU accounted for about 70% of China's PV product exports. In 2013, it dropped to around 30%. In early 2014, this proportion continued to decrease to 22.6%. The EU has already fallen to the third largest market for China's PV products exports. Residing in Japan and Africa.

Due to the high subsidies in the Japanese market and the heavy burden on the government, subsidies will be terminated at any time; emerging markets such as India and South Africa also have large uncertainties.

Deep adjustment of the photovoltaic industry

In the eyes of the industry, China's photovoltaic industry may enter a period of deep adjustment due to the impact of the deterioration of the international trade environment and the policy of the state to encourage mergers and acquisitions.

Currently, the PV market remains a policy-led market. Since the National Development and Reform Commission last year confirmed that the national distributed PV subsidy standard is 0.42 yuan / kWh, many provinces in the country have successively launched local version of the distributed photovoltaic subsidy policy; the Ministry of Industry and Information Technology has also released two The list of enterprises that meet the "Regulations for Photovoltaic Manufacturing Industry" will guide the development of industry norms, and based on this list, guide the financial institutions such as the National Development Bank to give priority support to key projects of key enterprises.

At the same time of policy support, domestic PV companies are also promoting the upgrading of product structure, changing â€œwinning by honestyâ€ to â€œwinning by qualityâ€ and consolidating their market position through differentiated product structure. For example, Trina Solar reorganized its internal organization in 2012, and established the Component Division, the Systems Division, and the Blue Ocean Division. The Group's component production is gradually extended to downstream frontier products to develop new businesses related to new energy. While developing related power station business abroad, Trina Solar has developed large-scale ground power station projects and distributed power station projects in Jiangsu and the central and western regions.

China's photovoltaic industry experienced the "cold winter" in 2012, and finally began to pick up in 2013. Some leading enterprises ended the loss situation for several consecutive quarters and began to turn losses into profits. Since 2014, the overall development of China's photovoltaic industry has continued to improve. However, many industry insiders said that they need to be alert to a new round of overcapacity.

Cam Lock Nuts in furniture and cabinet industry: also known as eccentric connection matrix, is the most commonly used panel furniture and cabinet production connectors accessories, she and connecting rods, embedded parts into a combination of three-in-one connectors, also known as disassembly connectors, because it can disassemble and assemble furniture at any time and anywhere, this connector is very large Convenient transportation of furniture, door-to-door installation, but also vigorously promote the overall furniture and cabinet industry production.
Indicators: The most common is made of zinc alloy by die-casting, its common specifications are 15, is the general specifications of furniture panels, of course, some furniture drawers and other thin plates are used in 12, 10 specifications, and some large-scale public furniture, due to the thickness of the plate, the use of the important demand for height. Due to the lack of domestic furniture hardware standards, there is no general standard in the industry. In terms of the current furniture industry plate specifications, the size of 15 is the most common, the largest use. 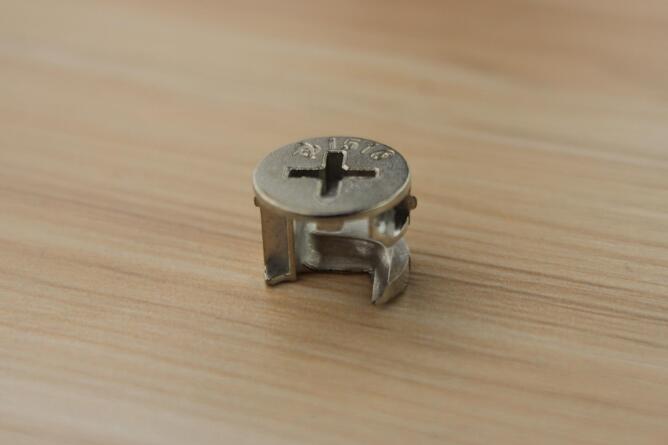 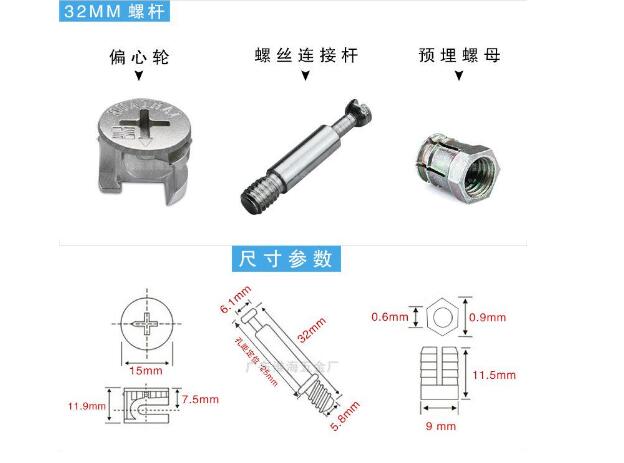 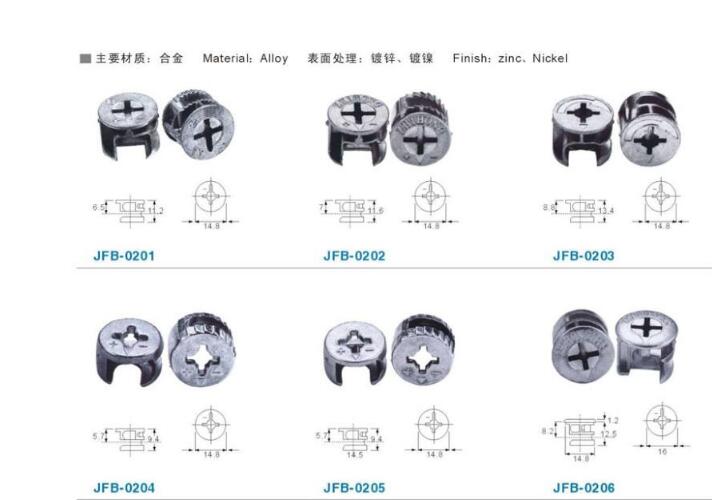